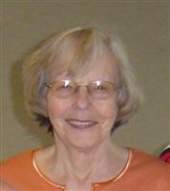 Lorraine Christine Quayle, 79, of Forest City, passed away at her home on Friday, May 16, 2014 after a five year battle with cancer.
In lieu of a funeral service, a celebration of life gathering will be held the shelter house in Pilot Knob State Park on Sunday May 18th from 2-4 pm.  Private burial of cremated remains will take place at a later date for the family.
Lorraine was born January 11, 1935, to Peter and Ethel (Erickson) Juhl on a farm near Miller.  She was the youngest of the six children.  She graduated from Forest City High School 1953.  She continued her education in Minneapolis, completing a program to become an lab/x-ray technician.
She married Robert “Bob” Quayle on July 24, 1955, after he completed military service in Germany.  They raised four children, Dick, Carmen, Beth, and Annette on their dairy farm south of Forest City.  Lorraine played a big part in the daily work on the farm, yet always made time for people.  She was a shining example of one who cheerfully put others ahead of herself.
She had a beautiful life, well lived, and leaves behind a legacy of love.  Faith, family, and friends were most important to her.  She trusted in Jesus Christ as her Lord and Savior at a young age and lived out her faith in a way that blessed others.  She grew up attending Faith Lutheran Church in Miller and as an adult became a member of First Baptist Church in Forest City.  She enjoyed being out in nature, going on picnics, square dancing in her younger years, Christian Women’s Group, the BCNU club for over 50 years, playing cards, and using her creative talents.  Her grandchildren cherish how she took time to read them books, play games, and do crafts.
Lorraine is survived by her husband of 58 years, Bob, and their four children:  Richard “Dick” Quayle, Carmen (Darrell) Steele, Beth (Burge) Hammond all of Washington, IA; and Annette Abel of St. Paul, MN.  Also surviving are 15 grandchildren and 7 great-grandchildren. Those living in St. Paul are Megan (Michael) Slate with children Gracie and Samuel; Chelsea, Carlie, and Chloe Abel. Living in Forest City are Kit (Val), Jesse, Levi, and Isaiah Quayle.  Living in Kalona is Amy (Jerad) Ropp with children Braxton, Bria, and Cameron.  In Washington, Iowa, are Jenna (Andrew) Schneider and son, Mason; Ryan Steele; Breann Osborn and son, Colton; Britni, Brooke, and Braden Hammond.  Lorraine has one surviving sister, Fern (Hubert) Branstad of St. James, MN.
Lorraine was preceded in death by her parents; an infant son, James Mason Quayle; three brothers, Larry, Ralph, and Harald Juhl; one sister, Anna Mae Beers.
The family would like memorial donations to go to Hospice of Northern Iowa who helped Lorraine immensely during her final weeks of life. Or consider honoring Lorraine’s memory by deciding each day to make a positive impact in someone’s life because you took time to be there and show you care.
To send flowers to the family in memory of Lorraine C. Quayle, please visit our flower store.