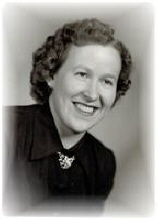 Alma Branyord, 87, of Webster City, died Wednesday February 27, 2013 at Southfield Wellness Community in Webster City.
Her visitation will be held Tuesday March 5 at 12:00 PM at Trinity Lutheran Church until a 2:00 PM Funeral service in Webster City.  Burial will be in Graceland Cemetery. Boman Funeral Home is in charge.
Alma was born to Alfred & Dagmar (Raven) Jensen on June 12, 1925 in Webster City. She attended local schools graduating in 1943. At age of 14, she began working in the children’s department of Kendall Young Library after school, on Saturday’s & during the summer until on year after graduating.  She was then employed at First State Bank.
On June 20, 1948 she married Dean Branyord of Radcliff.  They began married life on a farm near Alden.  There she worked at the banks in Alden & Iowa Falls. In 1950 they returned to Webster City and built their home.  She returned to First State Bank. Alma worked for a short time at the Flower Cart, then 18 years at Webster City Federal.
Alma enjoyed her home, flowers both inside & out.  She made many pictures in needle point & did Hardangar needle work.  She was an avid reader having as many as a thousand books.  They enjoyed traveling & going to Polka Festivals.
She is survived by her husband, sister Edith Jensen of Webster City, brother Aage (Joyce) Jensen of Marionville, MO, niece Kristine (Robert) Weiss of Muscatine, IA, nephew David (Sara) Jensen of Rogers, AR and six grand nieces & nephews.  She was preceded in death by her parents.
To send flowers to the family in memory of Alma Branyord, please visit our flower store.