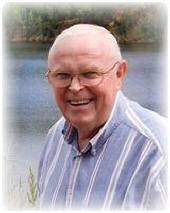 Alvin Wayne Totten of Firestone, Colorado went home to be with his Lord, Monday October 15, 2012 at Longmont United Hospital.  A Memorial Service will be held Tuesday October 23, 2012 at 10 AM at the Church of Christ in Webster City with Pastor Ray Artrip officiating.  A visitation will be held at the church from 6 to 8 PM on Monday.  Boman Funeral Home Webster City is caring for the family.
Wayne was born May 12, 1934 to Curtis & Nettie (Burnett) Totten in Ecorse, Michigan. He received his education in the Webster City Community Schools graduating in 1953.
On July 3, 1954, he and Norma Evonne Ober were married in Webster City.  He began his career and spent the majority of his working life in various positions at Nissen Packing Company in Webster City.  In 1989, Wayne moved to Minneapolis, Minnesota where he was a beef buyer for Rainbow Food Corporation.  He retired in 1998.
Wayne was an avid horseshoe pitcher and loved bowling, square dancing, camping, hunting, fishing & spending time with family. Watching sports on television and seeing his grandkids play, gave him great enjoyment.
His family includes: sister Pauline (Bill) Williams of Kissie Mills, MO; two sons Alan (Brenda) of Firestone, CO & David (Vickie) of Webster City; four grandchildren Sean (Hannah) Totten of Council Bluffs, IA, Kirbie Totten of Ames, IA, April (Josh) Johnson of Greeley, CO & Angela (Tony) Senne of Firestone, CO & six great grandchildren RJ, Cody, Savannah, Jacob, Dakota & Jackson. He was preceded in death by his parents, wife & brother (Derl).
The family has requested memorials be made to the Children’s Cancer Connection. Bomanfh.com
To send flowers to the family in memory of Alvin Wayne Totten, please visit our flower store.