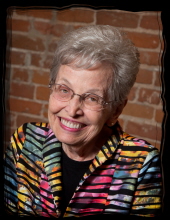 On March 24, 2018, Andrea “Andy” Boilesen, wife, mother, grandmother, sister, and friend to all, passed away peacefully at the age of 79. A Celebration of Andy’s life will be held at 2 pm, on Saturday, March 31, at Boman Funeral Home (www.bomanfh.com), 613 Ohio Street, Webster City, with Chaplain Gary Snook presiding.

Born to Robert and Lillian Huddleston and raised in Williams, Iowa, Andy attended Iowa State University and went on to work for the airlines, initially as a flight attendant based in New York City. She met her husband, Garold “Jerry” Boilesen, in 1963, through mutual friends--Andy was a ticket agent and Jerry was an aircraft mechanic at the Des Moines airport. They married on August 8, 1964. Two children and several “adventures in moving” to Florida, Colorado, and Minnesota followed. They ultimately decided to spend their retirement years in Webster City.

Andy, a life-long crafter (hence her business “Andy’s Annex”) loved making, giving, and teaching everything from ceramics to fleece blankets. She never met a stranger and enjoyed taking on food service and hostess positions as her children grew. Andy especially loved a good game of bingo and penny slots as well as laughter and conversation over coffee at the dining room table.