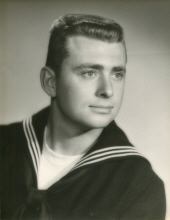 Arlen was born on October 29, 1935, in Denison, Iowa to Otto and Leona (Keiner) Petersen. He spent his earlier years living near Schleswig, IA and four years at Rapid City, SD, then on a farm near Dow City, IA, where he completed his education. Arlen worked at various jobs up to 1957 when he joined the Navy. He served aboard the Aircraft Carrier U.S.S. Bennington for two years, then received shore duty.

He married Lois Ann Meggers on June 28 at Zion Lutheran Church in Denison, IA. They lived in Chula Vista, CA until he received his discharge in 1961 when they returned to the Denison area where he helped with farm work and did trucking. In 1967 they moved to Iowa Falls where he was employed as a truck driver until moving to Ogden, IA in 1972 to do construction work. In 1974 they moved to Webster City, where he was yard foreman and later became manager of the Central Iowa Stockyards until they closed in 1987. He then returned to truck driving and enjoyed traveling thru many states. He retired in 1999 from White Transfer of Ft. Dodge.

Arlen enjoyed his many friends and fishing. His family was an important part of his life and he has special memories of their trips to California. Arlen was a lifelong member of the Lutheran Church.

Those who cherish their memories of him are: his wife Lois; two sons: Craig (Kelly) of Yorba Linda, CA, and Mark of Chino Hills, CA; five grandchildren: Brandon, Shane and Paige of Yorba Linda, CA and Cody and Connor of Chino Hills, CA; one brother Douglas (Carole) of Oceola, IA; mother-in-law Erma Meggers of Webster City; and sister-in-law Norma Jaacks of Webster City. Preceding Arlen to heaven is his father and mother.
To send flowers to the family in memory of Arlen LeRoy Petersen, please visit our flower store.