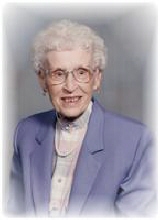 Bertha was born August 31, 1908 in Webster City to Charles & Sarah (Holloway) Owens.  She graduated from Webster City High School.  Bertha was a dental assistant in Fort Dodge, IA for many years.  In September of 1956 Bertha purchased the Credit Bureau of Hamilton County.  Her son (Doug) joined her in business in 1964.  Bertha expanded the Credit Bureau to Hardin County in 1966.

Bertha was the driving force in starting Congregate Meals in Webster City in 1982.  She received the Governor’s Volunteer Award from Governor Terry Branstad in 1990.