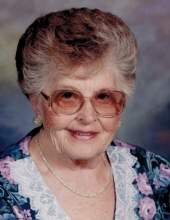 Beulah Fern Eyanson, 95, of Webster City, IA died on Saturday, December 15, 2018, at Southfield Wellness Community in Webster City. A memorial will be held on Saturday, January 5, 2019, at 11:00 AM, at Webster City Church of Christ. The family has chosen Boman Funeral Home (www.bomanfh.com) to care for their needs.

She was born on May 28, 1923, to David and Lucy (Nail) Gregory on a farm northeast of Webster, Iowa. She attended a country one-room school and graduated from Lincoln High School in 1941. Following graduation, she worked at various jobs in Webster City and Donnelly Corp. in Nevada, Iowa where she met her future husband Richard Eyanson. They were married on May 16, 1942, at the family home in Webster City. They lived in Nevada for one year at which time Richard entered the U.S. Army during World War II. Beulah then moved back to Webster City while her husband served in the South Pacific. She worked driving Star Laundry truck, Williams Drug, and Fairmont Creamery office. Following Richard’s discharge, they settled in Webster City and for many years Beulah stayed home as a housewife. Later she worked at Uker’s Sewing Shop. In 1959 Gregory Ray was adopted and later Chris Lee and Brenda Kay was adopted also. Beulah again took up the role of housewife and mother. In 1975 Beulah worked as a homemaker home health aide for Hamilton County and retired in 1985.