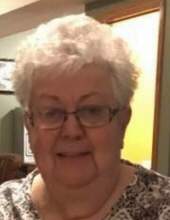 Bonnie Kliegl, 75, died on Sunday, June 11, 2017 at VanDiest Medical Center in Webster City. A Memorial Service will be held on Friday, June 23, at 10:30 AM at St. Thomas Aquinas Catholic Church. Visitation will be held Thursday, June 22, from 5-7 PM at Boman Funeral Home with a scripture service at 7:00 PM. The family has chosen Boman Funeral Home (www.bomanfh.com) to care for their needs.

Bonnie was born on July 22, 1941, to Glenn and Celia (Urich) Goretska near Alden, Iowa, welcomed by siblings Bob, Richard, and Sharon. She attended and graduated from Webster City High School. Bonnie entered the United States Marine Corps on August 21, 1959, she was a PFC (E-2) and served as a secretary at Parris Island, SC until her discharge on October 7, 1960.

Bonnie worked in the shipping office at Franklin Manufacturing and Beam Manufacturing. She married Richard Kliegl on February 21, 1974, in Webster City. Dick and Bonnie worked together at the Stock Yard Café and various food service operations for several years. She also worked at various local businesses until her retirement in 1993.

Bonnie was a member of St. Thomas Aquinas Catholic Church and the Legion Auxiliary. She enjoyed playing Smear and Euchre with her family, and spending time with her children and grandchildren. She was a great baker, her family enjoyed her peanut butter star cookies the most.