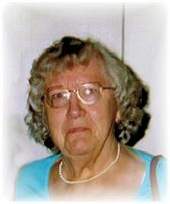 Carol Cornish, 87, of Webster City died on Tuesday, January 21, 2014 at the Southfield Wellness Community.  Funeral Services will be held in April.  Memorials may be given to Southfield Wellness Community.
Carol was born on July 26, 1926 in Aurora, IA to Mike and Marie (Puttnam) Anderman.  She married Irvin (Jack) Cornish, Jr. on December 16, 1945 in Arlington, IA.  Carol ran a small lunch shop, and also woked as a cashier at Treager grocery store and as a production worker.  She was a member of Trinity Lutheran Church at Hawkeye, and the women’s auxiliary.  After moving to Webster city she was a member of the Trinity Lutheran Church.
Carol’s family includes:  daughter Jan (Randy) Dancer of Waldport, OR; Son Lee of Webster City; daughter-in-law Norma Cornish of Webster City; 4 grandchildren: Jon Cornish and Leslie (Billy) Espinoza all of Webster City & Courtney Dancer, and Fred Dancer of Waldport, OR; two great grandchildren Devin and Urban.  She was preceded in death by her husband, three brothers, & two children Pamela & Denis.

A memorial service will be held Saturday - April 5, 2014 - 10:30 AM at Trinity Lutheran Church in Hawkeye, IA with Rev. David Nelson officiating.  A visitation will be held Friday at the church from 4 - 6 pm. Burial will be in Hawkeye cemetery. Boman funeral home of Webster City is in charge of arrangements.
To send flowers to the family in memory of Carol M. Cornish, please visit our flower store.