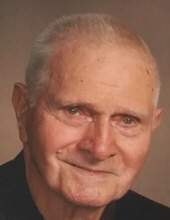 
Carroll Hall, 90, of Webster City, Iowa died on December 25, 2020, at VanDiest Medical Center, in Webster City, IA. A Visitation will be held from 9:30-10:45 AM, on Saturday, January 2, 2021, at the Kamrar Community Church in Kamrar, Iowa, followed by the Funeral at 11:00 AM. Please follow mask and social distancing guidelines. The family has chosen Boman Funeral Home (www.bomanfh.com) to care for their needs.

Carroll Orvie Hall was born on June 8, 1930, in Williams Iowa to Obed and Ruth (Anderson) Hall. He was married to Waneta Gayle Ubben on November 25, 1954, at the First Presbyterian Church near Kamrar, Iowa. The couple farmed near Williams, then near Blairsburg. In the 1960's Carroll began working at Electrolux in the tool and die area. In 1984 they had a farm sale and moved to Webster City. He retired in 1995. He was always a farmer at heart, and even though he spent his last few years at Windsor Manor, he enjoyed driving to the farm when he could sneak out for a few hours.

He was in many parades with his John Deere B that was restored by the NE Hamilton FFA. Carroll was a good welder and enjoyed doing it. He could fix just about anything…from Volkswagens to motorcycles to tractors. He believed in taking care of what he had. He loved his family and Jesus, and he loved his blue and white striped overalls. He also enjoyed spending time fishing.

His grandchildren referred to him as their greatest cheerleader and will carry with them memories of his slow and steady voice reading the Christmas Story before they could open any presents.