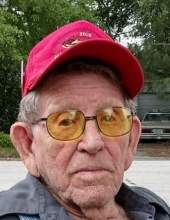 Charles William Linn, 91, of Stratford, Iowa, died on Tuesday, September 8, 2020 at the Mary Greeley Medical Center, in Ames, Iowa. Visitation will be held on Monday, September 14th, from 10:00-10:45 AM at the Calvary United Methodist Church in Stratford, followed by a memorial service at 11:00 AM. The family has chosen Boman Funeral Home to care for their needs (www.bomanfh.com)

Charles William, (also known by his nicknames Charlie, Chuck, Bill, or the Tootsie Roll man), was born on February 1, 1929, to Luther and Ophelia (Curtis) Linn. He married Pauline Long on May 20, 1950 in Lehigh, Iowa. “Charlie” worked at a variety of occupations including Vulgamott International dealership in Jewell, Lehigh Police Chief, Lehigh Lumber Company, construction on I-35, Farmhand, Co-op in Stratford and Franklins (Electrolux), until his retirement in the mid 1990’s.

To send flowers to the family in memory of Charles William Linn, please visit our flower store.