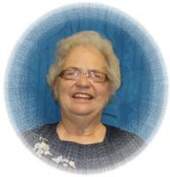 Charlotte Fredrickson, 70, of Forest City, died Monday, January 3, at the Muse Norris Hospice Inpatient Unit, Mason City, following a recent diagnosis of cancer.  Visitation with the family will be Thursday, January 6 from 4:00 to 7:00 p.m. at First Baptist Church, Forest City.  Funeral service will be on Friday, January 7 at 10:30 a.m. at the church, with burial in First Baptist Cemetery.
Charlotte Ann Nelson, born January 5, 1940, was the daughter of David and Stella (Anderson) Nelson, of Albert City, IA.  She graduated from Albert City High School, attended two years at Iowa State Teachers College, Cedar Falls, IA, and one year at the University of South Dakota, Vermillion.  She was married to David Fredrickson on January 30, 1960.  Their family honored them with a 50th anniversary celebration this past September.
In addition to being wife and mother, Charlotte worked with her husband in the family business, Greatwestern Products of Forest City, manufacturer of lamps and lampshades.  After the business closed, Charlotte became the administrative assistant for the Waldorf College Music Department for 19 years.  Among many important aspects of her job, Charlotte was in charge of scheduling concerts, travel, and housing for the choirs and bands throughout the United States and Europe.  She and David accompanied the students on these trips.  Charlotte was the 2004 recipient of the Holmen Professional Excellence Award given annually by Waldorf College.
After completion of the confirmation class in the Lutheran church in Albert City, the Swedish pastor asked Charlotte if she truly believed that Christ was her Savior. Answering yes and confessing her faith in Jesus, she felt a release from sin and new life in Christ.  She was an active   member of First Baptist Church, Forest City. Charlotte shared her talent as an accomplished pianist not only at the church but also by accompanying middle school, high school and college students in performances and contests.
Charlotte was a member of the Forest City Chapter of PEO, one of the organizers of the Community Concert Series in Forest City and later, the Waldorf College Artist Series events. She especially enjoyed reading, music, and playing bridge with her many friends.
Each of Charlotte's grandchildren held a special place in her heart and in her prayers. She was delighted that all of her children and grandchildren traveled to Mesa, AZ, to celebrate Christmas, 2010.
Her family includes her husband, David, son Tim and his wife Karen, their daughters Lynnea and Danika, and Swedish exchange student Karin Sproge of Forest City, her daughter Carol and her husband, Doug Tweeten, and their sons Ryan (Brighton, CO), Drew and Luke of Forest City, her daughter Sue and husband, Jeff Port, and sons Josh and Zack of Coon Rapids, MN, her sister and husband, Myrna and Marlowe Feldman of Albert City, and sister-in-law and husband, Liz and Peter Boman of Forest City, and five nephews and nieces. Charlotte was preceded in death by her parents.
Boman Funeral Home Webster City (bomanfh.com) is honored to be in charge of funeral arrangements.
To send flowers to the family in memory of Charlotte Ann Fredrickson, please visit our flower store.