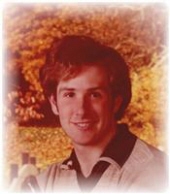 Chris Lee Eyanson, 52 of Webster City, died Thursday December 6, 2012 at Southfield Wellness Community in Webster City.  His memorial service will be Tuesday, December 11, 2012 at 10 AM at the Webster City Church of Christ with Pastor Chad Halbach officiating.  Private family burial will be in Graceland Cemetery.
Chris was born October 12, 1960 in Newton, Iowa.  He graduated from the Webster City High School with the class of 1980.  Following his graduation he was employed at various jobs in Jewell, Webster City, Beams Industry, Modern Farms, Daily Freeman Journal, and Kmart where he was named employee of the week.  Because of his mental illness he resided at Greenleaf in Fort Dodge for seven years and most recently at Southfield Wellness Community in Webster City, Iowa.   Chris was an avid fisherman and an outdoors man.  He was also a lover of football, basketball, baseball and all other sports.  Chris enjoyed the time with his compeer friend Nick Woolley.  He was a long time member of the Church of Christ and enjoyed reading his Bible.
His family includes:   his mother, Beulah Eyanson of Webster City;  brother Greg Eyanson, of Alexander, Iowa; and sister Brenda Snider and husband Tim of Stanhope, Iowa; nieces Allison Eyanson, Jennifer Sheehan, Angela Snider, & Jessica Snider; Nephews Aaron Snider, Austin Snider, & Travis Snider, and great nephew J.J. Sheehan.
Chris was preceded in death by his father Richard who passed away October 5, 1992.  Memorial will be designated to Mental Health Research.
To send flowers to the family in memory of Chris Lee Eyanson, please visit our flower store.