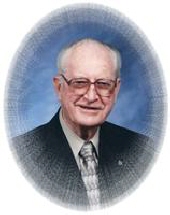 Clarence C. Patten, age 94, of Webster City, IA died on May 16, 2012, at Paula J. Baber Hospice Home in Fort Dodge, IA.
Clarence was born November 17, 1917, in Chelsea, South Dakota, son of Harry and Elizabeth (Tomek) Patten.  He was raised on a farm near Cresbard, SD.  He graduated from the Cresbard Consolidated School in 1936.  He graduated from the Aberdeen Business College in 1938.
On January 5, 1942 he married Margaret Helen Yeoman at Aberdeen, South Dakota.  Mr. Patten served four years in the military service (Army) during World War II in the AG section of Division Headquarters of the 35th Infantry Division.  He was attached to the 1st Army, 3rd Army, 7th Army, and 9th Army during the European conflict.  He participated in five major campaigns:  Normandy, Northern France, Rhineland, Ardennes (Battle of the Bulge) and Central Europe.
Mr. Patten began his 43 year career with the International Harvester Company in 1937 at Aberdeen, SD, and transferred to Minnesota in 1953 and later to Iowa.  He held the positions of Motor Truck Parts Foreman, IH Farm Equipment Store Manager, and District Manager in Aberdeen, SD; Austin, MN; Emmetsburg, IA; Osage, IA; and Webster City, IA.  The family moved to Webster City, IA in 1974 and continued to reside there after Mr. Patten retired from International Harvester Co. in 1980.
He was a member of St. Thomas Aquinas Church of Webster City.  Mr. Patten was a life time member of the American Legion Post 191, having held the positions of Commander, Finance Officer, and Service Officer.  He was a member of the 35th infantry Division Association; Veterans of the Battle of the Bulge; Navistar/International North Central Retire Club of Minneapolis, MN.
After retirement, he was a member of the Webster City Senior Citizen Club, the Birthday Club, a volunteer for RSVP; and a charter member of the Webster City Diamond “K” Kiwanis Club.  In 2010, Mr. Patten took a trip to Washington DC with the Brushy Creek Area Honor Flight.

Visitation one hour prior
To send flowers to the family in memory of Clarence C. Patten, please visit our flower store.