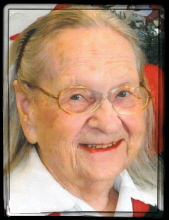 Cleo Camilla (Taylor) Graham, 103, of Webster City, died on Sunday, November 25, 2018, attended by her nieces, at the Crestview Nursing and Rehabilitation in Webster City. Memorial services will be held Saturday, June 29 at 11 a.m. at the First Congregational United Church of Christ with Pastor Craig Blaufuss officiating.

Born in Jewell Iowa on July 1, 1915, Cleo Camilla Taylor was born in Jewell Iowa to Raymond Archie Taylor and Selma Camilla (Millie) Fjetland Taylor. Her family moved to Webster City until her father purchased farmland north of Webster City and she grew up on Blueberry Hill, attending rural schools until High School, and graduated from Lincoln High School in 1932 at the age of 16. She became certified to teach in the rural schools through Normal School training, teaching at Harmony, Fremont and Cass Union Schools before she married Ralph Wendall Graham in a private ceremony in Webster City Iowa. After her marriage, she worked periodically for the Hahne Printing Company and Woodard Feeds

Cleo was a quiet person most of her life but was a regular member of the Mount Zion Community Club and Silver Thimbles, neighborhood groups that met south of Webster City. In later years she helped with the quilting group “The Piecemakers” at the First Congregational United Church of Christ. She was a 4-H leader for the Freedom Flickers 4-H Club, and helped with planning her class reunions, writing poetry for her classmates, creating whimsical decorations for the tables, designed programs, compiled stories, and assisted wherever needed.

As a farmwife, she kept huge gardens, canning most of their food, raised chickens, sold eggs, and cared for the many cats and other animals that appeared on her doorsteps. She was also an avid seamstress and artist, known for painting, drawing and sketching up until the last year of her life. Reading both fiction and non-fiction was a major part of her life, and her literary skills included short stories and hundreds of poems, many published in both state and national publications. An adult during the depression years, she was very frugal, rarely spending money on herself, and re-purposed all types of materials not only in quilting projects but in clothing and crafting projects.

Memorials may be directed to libraries in Ellsworth, Story City or Webster City, or of personal choice, to the First Congregational Church, or to the Almost Home rescue shelter or other pet shelters
To send flowers to the family in memory of Cleo Camilla Graham, please visit our flower store.