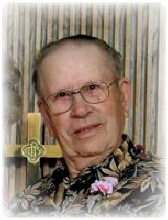 Clinton Glenn Widick, 87, of Stratford, IA, died January 12, 2014 at the Stratford Nursing & Rehab Center.
Clint was born to Cecil & Ilene (Pratt) Widick on May 22, 1926 in Rural Webster County, IA.  He attended Lehigh & Stanhope Schools. He and Alice Davenport were married July 15, 1945 in Algona, IA and honeymooned in Arnolds Park, IA. They lived in LuVerne, IA for a short time before moving to Rural Stanhope to farm in 1946. They operated a livestock & row crop farm until retirement in 1993.  Clint could fix anything on the farm including his machinery. If he needed a small tool for a job, he would make it.
He was busy on the farm but found time to give back by serving as president of the Lions Club (earning the Warren Collman award), as a member of Calvary United Methodist Church he held several committee positions & he was a member of the Boone Valley Ikes.  They enjoyed camping at Branson and the local camp grounds or just starting a camp fire at home.  Clint enjoyed playing guitar & harmonica, singing, fishing, hunting, photography, woodworking, gardening (taking pride in his tomatos) & baking bread & rolls.
The family he leaves includes: his wife of 68 years; three children Bill (Diane) of Clear Lake, IA, Jerry (Barb) of Webster City & Donna (Bill) Busch of Jewell; 12 grandchildren; 32 great grandchildren; one great great grandchild; brother DeWayne (Virval) of Webster City & sister Alveda (Jerry) Kent of Stanhope.
His parents, daughter (Gloria), granddaughter (Pam), great grandson (Nathan), sister (Minnie) & brother (Robert) preceded him in death.

Clinton Widick, 87, died Sunday, January 12, 2014 in Stratford, IA. The service is Saturday at 1:30pm at Calvary United Methodist Church in Stratford. Visitation is Friday 5-7 at the church. WWW.bomanfh.com
To send flowers to the family in memory of Clinton Widick, please visit our flower store.