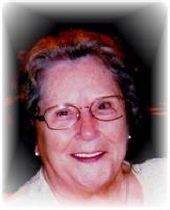 The world lost one of its most beautiful smiles God ever created. Colleen Maree Grandgeorge (Pringle), beloved wife, mother, aunt, grandmother and great-grandmother peacefully went to rest in God’s arms on April 22, 2015 after bravely fighting complications due to a fall in May of 2013.


Colleen was born and raised in Webster City, Iowa as the youngest of Roland and Edna (Surles) Pringle’s two children. She attended Lincoln High School and married Lester Graves in 1953. This union produced two children, Connie and Ron.


In 1959 she remarried Laurent Grandgeorge and became a stepmother to Duane. In the 55 years they were united they had two children, Collette and Randy. The family resided in Webster City for many years and then in Eagle Grove and later in life moved to Des Moines, Iowa to manage the Imperial Apartment Complex. In retirement they moved to Woolstock, Iowa.


During her life Colleen worked at Globe Union in Fort Dodge and Morton Foods in Webster City. She also worked for Younglove Construction and the Webster City and Clarion hospitals.


Colleen was a very creative person who found time to crochet, knit, embroider, make quilts, ceramics, and woodworking projects and various painted crafts. Colleen also taught classes at ICCC, raised horses and sewed baby layettes for the church. She also was a member of the French Club, camping club and VFW women's auxiliary.


During her life, Colleen spent a lot of time camping and traveling including numerous trips to France and a visit to Scotland. Colleen was as proud of her Scottish-Irish American heritage as she was of Laurent's French heritage.


She was preceded in death by her husband, Laurent, and her parents, Roland James and Edna Marie Pringle (Surles), her brother, Jim Pringle, niece Marcy Pringle Jones, grandson Randall Andrew Jr. and several aunts and uncles.


Services for Colleen will be held Saturday April 25 at 3:00PM in Woolstock, IA at St. Peter”s Lutheran Church. She will be buried at The French Church Cemetery.


Cards may be sent to The Villa Care Center, 2721 10th Ave. North, Fort Dodge, IA 50501.
To send flowers to the family in memory of Colleen Maree Grandgeorge, please visit our flower store.