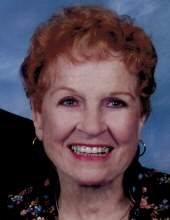 Darleen King, 97, of Webster City died on November 20, 2020, at Crestview Nursing and Rehabilitation. Private family services will be held at a later date. The family has chosen Boman Funeral Home to care for their needs.

Darleen was born on February 4, 1923 to Leonard and Mildred (Thornton) Sullivan, in Hillsboro, Iowa. She graduated from the Salem High School in 1941 and went on to attend the University of Chicago, for nurses training. She was united in marriage to Leo Spencer on July 31, 1965. Darleen spent many years in California, where she worked in doctor’s offices.

After Leo’s death in July 2002, she reconnected with an old high school friend Rex King, and they were married on April 12, 2003. Darleen was a member of Asbury United Methodist Church in Webster City. She enjoyed painting and metal etching.