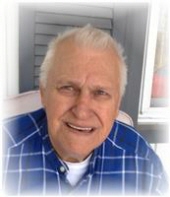 Darrell Dean (Coke) Wahlers passed away on Monday, February 16th at the Mercy Medical Center in Des Moines of complications from influenza.  Memorial Service will be Monday February 23 at 2 PM at the Boman Funeral Home, with visitation the same afternoon starting at 1 PM.  Boman Funeral Home of Webster City is in charge of arrangements www.bomanfh.com
Coke was born on January 7, 1928 to Fredrick and Alma (Miller) Wahlers in Webster City.  He attended the Webster City Schools, graduating in 1945 and immediately enlisted in the US Navy, where he served for two years.  Upon his discharge he became a plumber, eventually working for the Webster City Water Department until retiring in June of 1990.
In January of 1950 Coke was united in marriage to Carla Jean Crippen.  They recently celebrated 65 years of marriage.  Coke was a proud fifty year member of the American Legion Post 191, a former member of the Moose Lodge, and will be remembered for his quick smile, a ready joke and his love of playing golf.
Coke’s family includes: his wife; daughters Jennifer (David) Espinoza of Kamrar, and Jan (Steve) Dickinson of Cedar Rapids; son Don Wahlers of Dallas, TX; six grandsons; fifteen great grandchildren; and one brother Davy Lee William Wahlers (Jan Paschal) of Apache Junction, AZ.  He was preceded in death by: brother Donald who died in WWII; two sisters:  Estelene Wahlers and Phyllis Andrew.
The family would like to express their heartfelt thanks to the staff at the Van Diest Medical Center and the CCU staff at Des Moines Mercy Medical Center for their combined month long care.
To send flowers to the family in memory of Darrell (Coke) Wahlers, please visit our flower store.