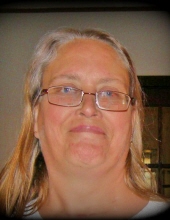 Debbie Sue Spellmeyer, 54 of Webster City died on July 22, 2016 at the Kavanagh Hospice House in Des Moines Iowa. The family will receive family and friends on Tuesday, July 26 from 5:00 – 7:00 PM at Boman Funeral Home. A memorial service will be held 10:00 Am on Wednesday, July 27 at 1st First Baptist Church, Webster City. The family has entrusted Boman Funeral Home (www.Bomanfh.com) to care for their needs.

Debbie was born on July 4, 1962, in Antioch, California to Lionel and Alice (Phillips) McGuire. She graduated from the Webster City High School in 1980. She married Steven Douglas Spellmeyer on November 19, 1984, the couple divorced in 2010.

She worked at Farm Journal and then Pig Pro doing data Entry. She was a member of Kendall Young Library. Debbie loved making cross stitch items for her family, enjoyed reading murder mysteries. She also collected Native American pictures and items, as well as statues of big cats. Her favorite thing was spending time with her family especially her two grandsons.