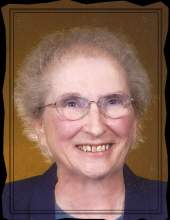 Delma Mae Ellefson was born on March 26, 1929, in rural Galt, Iowa to Rosa (Denger) and Maurice Ellefson. The family settled in Alden and Delma graduated from Alden High School in 1946. After graduation, she was employed by Dr. O.C. Buxton in Webster City. In 1950 she graduated from Iowa Lutheran Nursing School in Des Moines, Iowa. She returned to Webster City and worked as an R.N. for Dr. Buxton for 18 years, and then she worked for 24 years at Hamilton County Public Hospital where she was a night shift supervisor for many years until her retirement in 1993.

Delma married Merlyn Schnell on March 19, 1955. The couple lived in Webster City most of their married life. Delma was a member of First Baptist Church of Webster City and the American Legion Auxiliary of Alden. She enjoyed her family and her “retired nurses” coffee group.

She was predeceased by her parents, her husband Merlyn in 1997; and one brother Donald in WWII; two sisters: Dola (in infancy), and Kathryn and her husband Keith Hinrichs; granddaughter Andrea (Mike) Reed; great-granddaughter Isabel; brothers and sisters-in-law Bernard and Vinie, Frank, Larry (Gloria) and Bob Schnell and Art Dayton.
To send flowers to the family in memory of Delma "Del" Schnell, please visit our flower store.