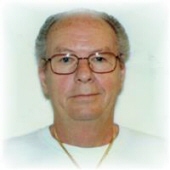 Dennis Arthur Alborn, 73, of Stratford formally of Fort Dodge, died Tuesday, October 8, 2013.  His memorial will be Saturday at 2:00 PM at Boman Funeral Home in Webster City with Pastor Chad Halbach of the Webster City Church of Christ officiating.

He was born to Arthur & Cleda (Taylor) Alborn on September 14, 1940 in Perry, IA. He graduated from Fort Dodge High School in 1958 and Iowa Central Community College with an AA degree.  Dennis entered the Army in 1960.  After three years he received an honorable discharge.  Linda Thomas and he were married in 1965.  They divorced in 1976.  Dennis married Virginia Brown in 1977.  She died in 2006.

Dennis spent his working days as a station agent for several airlines from 1963 to 2005 in Jacksonville, FL. He was a member of the American Legion in Jacksonville.  Dennis enjoyed shooting, hunting, fishing, boating and yard work. He and Virginia traveled together on airlines and cruise ships.  There favorite destinations were the tropical islands and Hawaii.

He was preceded in death by his parents, wife, & daughter (Danise).  The family will decide memorials at a later date.
To send flowers to the family in memory of Dennis Arthur Alborn, please visit our flower store.