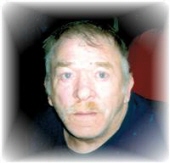 Derald Dean Harms, 74 of Clarion passed away Tuesday, July 30, 2013.  Memorial service will be held on Saturday, August 3, at 2 PM, at the Nazarene Church  1010 2nd SW in Clarion.
He was born on September 4, 1938 to John and Luella (Meinders) Harms, in Iowa City.  Derald attended country schools near Kanawha.  In 1966 He married Jerri Geerdes.  The couple divorced in 1990.  Derald was a welder a different manufacturing companies until he became disabled and retired in 1983.
He enjoyed playing 500 when he was younger.  Derald liked to drive around town with his pickup, watching television westerns and doing crossword puzzles.
His family includes his children:  John and Robin both of Webster City; Brother Bud of Goldfield; grandson:  Dennis Bahrenfuss of Webster City; three step-grandchildren: Tyler, Kayla, and Nicholas Nelson of Webster City & a special friend JoAnn Anderson.  He was preceded in death by his parents; brother Richard and infant daughter Tracy.
To send flowers to the family in memory of Derald Harms, please visit our flower store.