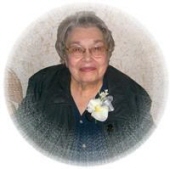 Dolores Catherine Anderson, 79 of Webster City, passed away on December 14, 2012.  Private family services will be held at a later date.
She was born on June 25, 1933 in Templeton, Iowa to George and Hilda (Venteicher) Bierl. Prior to her retirement Dolores was employed by the Hamilton County Hospital.  She enjoyed her children and grandchildren and had a love for animals, especially cats.