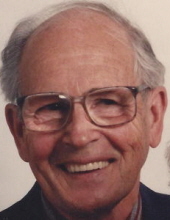 Visitation will be Saturday, August 27, 2016, from 1:00 to 4:00 p.m., at Boman Funeral Home in Webster City. Following visitation, cremation will take place. Private family graveside services will be held at Graceland Cemetery in Webster City at a later date. For online obituaries and condolences please visit: www.carsonstappfuneralhome.com or www.bomanfh.com

Donald Bryner Lund was born on August 27, 1923, in London, Minnesota, the son of Lawrence and Lila (Hansen) Lund. He graduated with the Story City High School class of 1942. Following his education, Don was drafted into the United States Army. He was stationed in England and France during WWII, where he served with the Military Police, earning the rank of Sergeant. Don was a guard at the Shepton Prison, was an excellent marksman, and was asked to be an Honor Guard. While in England he met his future wife, Muriel Irene Gane. Don and Muriel were united in marriage on March 22, 1945, at St. Peter & St. Paul's Church in Shepton Mallet, England. To this union three children were born: Donna, Robin, and Michael. Following his honorable discharge in 1946, Don and Muriel returned to the United States where they lived briefly in Chicago before returning to Story City. In the Mid 1950's, Don and Muriel moved to Webster City where they established their home. Don was employed by numerous newspapers as a press operator, compositor, and typesetter. In 1989, he retired from the Webster City Freeman Journal after 37 years of service.

Don was a charter member of the Men's Garden Club, the Boone River Carving Club, and also belonged to the Webster City American Legion Post #191. He enjoyed watching the birds that would come to his birdfeeders, gardening, carving Santa Claus figures, woodworking, and most of all, spending time with family and friends.