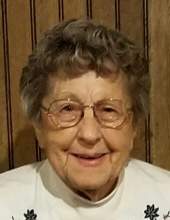 
Donna Latch, 96, passed away on May 3, 2021 at Southfield Wellness Center in Webster City of natural causes. Services for Donna Latch will be 11:30 a.m., Friday, May 7, 2021 at the Boman Funeral Home in Webster City. Open visitation will take place one hour prior to services. Burial will take place in the Blairsburg Cemetery following the service.

Donnabell Bernice, daughter of Walter and Ila Erickson, was born on August 7, 1924, in Dows, Iowa. She was the fourth of seven children and grew up in the Dows area attending country school through 8th grade in that area.

In the early 1940’s, she worked at the Hinson Manufacturing Company in Waterloo, in support of the war effort, cutting and sewing textiles for the military.

On November 22, 1945, Donna was united in marriage to Harold Pruismann in Clarion, Iowa. The couple began their life together on a farm in Bigelow, MN. They later resided in Dows before settling in Blairsburg, in 1952. Donna and Harold had three children. Donna worked several jobs while raising her family, including M&M Café, Kramer Motel, Franklin Manufacturing and Southfield Wellness Center. Harold passed away in June 1977.

On May 2, 1982, Donna was united in marriage to Ralph Latch and they resided in Williams. Ralph passed away in March 2005. Donna returned to Blairsburg in 2007 and later entered Southfield Nursing Home in March 2017.

Preceded in death by husbands Harold 1977 and Ralph 2005, her parents, four sisters and their spouses, five sisters-in-laws and one brother-in-law.

The family extends thanks and appreciation to Dr. Sahai, Southfield staff, and UnityPoint Hospice staff for their kindness and compassion as they cared for our mother.
To send flowers to the family in memory of Donnabell Pruismann Latch, please visit our flower store.