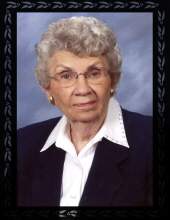 Doris Stearns, of Webster City, IA passed away peacefully at her home on March 9, 2019, she was 104 years of age. The family will receive friends and relatives at 1st Baptist Church in Webster City, on Wednesday, March 13 from 10:00 –10:45 AM followed immediately with a memorial service at 11:00 AM at the church. Boman Funeral Home is in charge of arrangements.

Doris Anderson was born on April 10, 1914, on a farm northwest of Webster City to N.G. (Gus) and Anna Heidick Anderson. She attended Mud Hollow County School, later teaching at that school. She graduated from Webster City Lincoln High School with the class of 1932.

On February 1, 1935, Doris and Frank Stearns were united in marriage at the First Baptist Church parsonage. They farmed south of Webster City for several years, raising their daughters Barbara and Beth. In 1945 they moved to a farm north of Webster City where they lived and farmed for 48 years. They moved into Webster City in 1993.

Doris was a full-time homemaker. For 12 years she cared for her beloved daughter Barbara, stricken with polio at an early age. Barbara passed away in 1960. Doris enjoyed hard work, baking, gardening and helping with farm work. She loved the farm and visiting with friends and neighbors. She was a Cass Red Peppers 4-H leader for many years, and a member of the B-Neighborly club.

Doris was confirmed at the English Lutheran Church, now Trinity Lutheran Church and later became an associate member of the First Baptist Church where she was active in the women’s circles. She had a deep faith. After retiring from farming Doris and Frank enjoyed traveling and spent many winters in Florida.

In Lieu of flowers, memorial may be made to Kendall Young Library or First Baptist Church. The family wishes to thank Life and Health and Kindred Hospice for their care.
To send flowers to the family in memory of Doris Stearns, please visit our flower store.