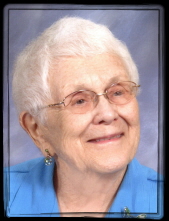 Dorothy Anne McKee was born in Webster City, Iowa on April 3, 1924, to Howard Marcy and Ruth Tatham McKee. She attended Webster City Schools, graduating in 1942. She attended Iowa State University and graduated from Drake University with a teaching degree. On March 3, 1944, she married Ralph Lawrence Stearns. To this union a son, Howard, and daughter, Anne were born. Dorothy and Ralph lived on the family farm for thirty-six years, moving to town in 1982. They wintered in Texas for many years.

She was a lifelong member of First Congregational Church where she served in many capacities. She was a 4H leader of the Cass Red Peppers; a 74-year member of PEO Chapter EL; and a lifetime member of the Iowa Polio Survivors Group. She was most proud of being a Certified Braillist for the blind, having completed the study with the Library of Congress. She transcribed over twenty books. She was deeply touched by the letters she received from those who used them.

Memorials may be made to the First Congregational Church of Webster City, PEO Chapter EL, or a memorial of your choice.
To send flowers to the family in memory of Dorothy A Stearns, please visit our flower store.