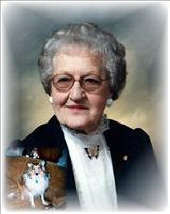 Dorothy Mae Ingraham, 89, of Webster City, IA, died Monday June 22, 2009 at her home. A memorial service will be held on Tuesday at 11:00 AM at Faith United Methodist Church in Webster City. Burial will be at a later date in Rosehill Cemetery in Nevinville, IA.


She was born August 18, 1919 in Diagonal, IA to John & Elsie (Everling) Oshel. Dorothy graduated from Lenox High School in 1937. She attended teachers college in Peru, NE & finished with a teaching certificate from UNI in Cedar Falls, IA. She then taught in country school.


Harry Ingraham & Dorothy were married on May 24, 1941 in Grant City, MO. The couple farmed until his death in 1975. She then worked at Webster City Custom Meats until retirement. She was a member of Faith United Methodist Church where she was in charge of the funeral committee for several years & cooked for the quilt club.


She was preceded in death by her husband, brothers (Clyde & John) & sisters (Fern & Linnabell).
To send flowers to the family in memory of Dorothy Mae Ingraham, please visit our flower store.