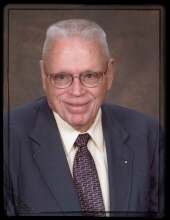 Douglas Dwayne Doolittle, 84 of Webster City, died on Sunday June 18, 2017, at the Stratford Care Center. His funeral will be held on Thursday at 11 AM – June 22, 2017 at the Webster City Church of Christ with a visitation Wednesday from 5 to 7 at Boman Funeral Home.

Douglas was born on April 4, 1933, on a farm in Wright County, Iowa to Milton and Bertha (Owens) Doolittle. He attended country schools through the 8th grade, and Webster City High School through his junior and graduated from Fort Dodge High School in 1950. He then attended and graduated from Capitol City Commercial College in Des Moines.

Doug met Shirley Beier at the Y.M.C.A. Supper Club in Des Moines, Iowa when both were employed in Des Moines. The couple married on September 9, 1956, in a little country church, Liberty Methodist Church, west of Klemme Iowa.

Doug worked for ten years at Ford Motor Company. He began working in the Hamilton County Credit Bureau, that was owned by his mother in March of 1964. In 1973, he started working with Insurance and did Tax preparation owning the first H & R Block in Webster City. Doug and Shirley were active in several local churches. Doug served on various committees, and taught Sunday school. He was a Mason and an active member of the Order of the Eastern Star. He was an active member of the Gideons International, serving in various offices, both local and state. He was a past chairman of the Hamilton County Republicans. Doug and Shirley had many enjoyable times as members of the Stratford Strutters Square Dance club and traveling the world together.

He was preceded in death by his parents, wife Shirley (who died on the exact day 11 years earlier), and daughter LeAnn Marie.
To send flowers to the family in memory of Douglas D. Doolittle, please visit our flower store.