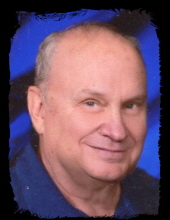 Douglas Kolbeck, 67, of Webster City died Friday - Nov 3, 2017.His memorial will be Tuesday - 2:00 pm at Asbury United Methodist Church, Webster City. Visitation one hour prior. The family has chosen Boman Funeral (www.bomanfh.com) Home to care for their needs.

On July 26, 1969, he and Kathy Anne Frakes were married at the Webster City Church of Christ. He started working at Kolbeck Disposal service and eventually become a co-owner until it sold in 1979. He worked at Webster City Products from 1979 until 1992. While there, he was inspection and line foreman.

Kathy and Doug enjoyed dancing and camping in Iowa and “out west”. He enjoyed making craft items out of wood for Kathy to paint.

Memorials may be made to Ecumenical Human Needs fund or Asbury youth programs.
To send flowers to the family in memory of Douglas James Kolbeck, please visit our flower store.