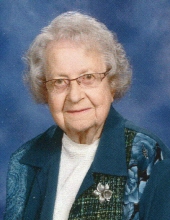 Edith Jensen, 96, of Webster City, died Thursday, July 7, 2016 in Clarion, IA. A funeral service will be held at Boman Funeral home on Wednesday, July 13 at 11:00 AM with Rev. Dr. Michael Kroona officiating. A visitation will be prior to the service at 9:45AM. Burial will be in the Graceland Cemetery.

Edith, the daughter of Alfred and Dagmar (Raven) Jensen, was born March 12, 1920 in her grandparents’ home at 1117 Third Street. One month later she moved with her parents to 1120 Third Street, her home until her death.

She attended Webster City Schools, graduating in 1938 and later attending Grand View College in Des Moines. Following graduation, she was employed at several places in Webster City including 17 years at the National Chiropractic Association, 17 years at Hahne Printing Company and six years at Association Group Agency until her retirement.

Edith enjoyed her home, flower and vegetable gardens and traveling. She was an avid reader, did counted cross stitch, was a volunteer driver, and took up flying earning her pilot’s license. She was a confirmed member of the English Lutheran Church which later became the Trinity Lutheran Church.