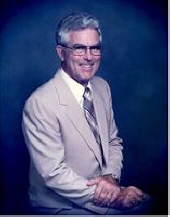 A Memorial Mass will be held Monday at 10:30 am at St. Thomas Aquinas Catholic Church with Father Scott Boone officiating.  A Rosary, Prayer and remembrance service will be Sunday at 2 PM at Boman Funeral Home with Marita Doerning leading.  Burial will be in a Veterans Cemetery at a later date.

Ed was born August 20, 1920 in Sioux City, IA to Roy & Marjorie (Frick) Scribbins. He lived there until he was inducted into the Army in 1942.  He served with Patton’s 3rd Army in France until he was seriously wounded.

Ed married Elaine Jessen on September 03, 1951 at St. Cecelia’s Catholic Church in Ames, where they also had their first date.  In 1952 he graduated from Iowa State College in Ames.  He worked as a farm manager and realtor for Doane Agriculture Service from 1952 until his retirement in 1987.