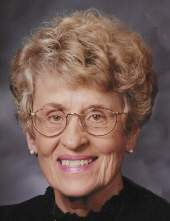 Betty was born on December 31, 1932, to Oscar and Sarah (Parks) Crandall, in Hampton, Iowa. She graduated from the Chapin High School, in Chapin, Iowa. Betty married Junior A Mordick, on November 24, 1950 at the Little Brown Church in Nashua, Iowa. The couple lived in Hampton, until 1959 when they moved to Webster City. Betty worked as a dental Assistant for Dr. Haynes for several years and then at Webster City Federal until her retirement.

Betty enjoyed playing bridge and going for coffee with friends. She was an accomplished seamstress, making clothing, teddy bears and many other things. Betty was also quite a crafter, making and selling numerous items. She was a member of Asbury United Methodist Church in Webster City.