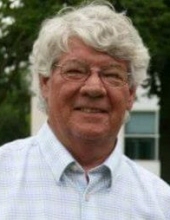 Emmett James Cooney, the son of Joseph L. and Lois M. (Hoyle) Cooney, was born May 25, 1948, in Iowa City, Iowa. He was raised and educated in Marengo, graduating from Iowa Valley High School in 1966. Emmett then graduated from Webster City Junior College in 1968.

On October 5, 1968, Emmett was united in marriage with Kristin Doolittle in Cedar Falls, Iowa. Emmett entered the United States Air Force on October 9, 1968. He was a military policeman stationed at Ellsworth Airforce base in Rapid City, SD, Offutt Airforce base in Omaha, NE and the Airforce Academy in Colorado Springs, CO. He was honorably discharged on September 1, 1972.

The family returned to Iowa and Emmett received his Bachelor's Degree from UNI and later his Master's Degree from Drake University. He began his career in education starting in Dayton (1974) and it continued in Eddyville, Independence, and Sioux City – where he served as a principal – retiring in 2003. Emmett also enjoyed his years of coaching basketball in Dayton, Ellsworth Community College, and Webster City.

The light of Emmett's life was his wife, Kristin, his kids, Tom and Megen and his five grandkids. He also enjoyed spending time with his family and friends in the pool listening to Irish folk music and sharing stories. Emmett was a Nascar fan and collected racing memorabilia.

Emmett passed away on Wednesday, September 21, 2016, at Mayo Clinic in Rochester, MN, at the age of 68 years. He was preceded in death by his parents and brother-in-law, Jimmy Doolittle.

Visitation will be Sunday, September 25, 2016, from 3:00 to 5:00 pm at Boman Funeral Home in Webster City with a Memorial Service at 5:00 p.m. with Pastor Jon Rollefson, officiating. Foust Funeral Home (http://www.foustfh.com) of Eagle Grove is in charge of arrangements.

Memorials may be left to the discretion of the family.
To send flowers to the family in memory of Emmett J Cooney, please visit our flower store.