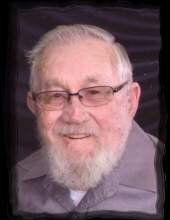 Emmett Timm died on Tuesday, April 11, 2017, at his home. Memorial service will be Wednesday, April 19, 2017, 10:30 AM at St. Thomas Aquinas Catholic Church in Webster City. The family has chosen Boman Funeral Home (www.Bomanfh.com) to care for their needs.

Emmett was born on April 28, 1932, in Webster City, Iowa to Walter and Margaret (McPhillips) Timm. He graduated from the Blairsburg High School. Emmett married Marilyn Carol Mullins on December 27, 1952, in Webster City.

He enjoyed camping and traveling with his wife, going to the Iowa State Fair, car rides with his family, tractor pulls, homemade ice cream, and their cat Hurley. After retiring he did small engine repair in his garage as a hobby, he loved to work on things with his hands. He fixed many lawnmowers for quite a few years. He had a fulfilled life with life, work and family. Emmett was a member of St Thomas Catholic Church in Webster City.