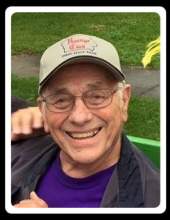 Erwin Dean “Duffy” Christianson of Webster City, Iowa, died at Mercy Hospital in Des Moines of congestive heart failure on September 12, 2019. At 85 years young, Duffy went to be with the Lord he loved.

The youngest child of Evan and Theline (Anderson) Christianson, Erwin was born in Lake Mills, Iowa on March 16, 1934. Erwin attended Lake Mills High School, graduating with 58 others in the class of 1952. He attended Iowa State Teachers College and graduated with a degree in Music Education/Vocal Performance in 1956 and then received a master’s degree in Choral Direction from the University of Northern Iowa in 1963. Duffy’s mother played the piano by ear for silent movies in the Lake Mills theater when he was a little boy. He undoubtedly developed his love of music sitting in that theater listening to his mom play. And like his entire high school class, he grew up attending Salem Lutheran Church in Lake Mills.

Erwin was united in marriage to Linda Neuhart on December 3, 1955, in Charles City, Iowa. A blizzard kept the couple from reaching their honeymoon destination of Minneapolis, Minnesota. Erwin and Linda met at Iowa State Teachers College while both worked for the on-campus Food Service department, earning sixty cents an hour.

Duffy’s first student teaching assignment was the High School Band Director in Independence, Iowa. In 1956, "Mr. C." began teaching High School choral music in Webster City. He would serve in this role, directing countless musicals, choir performances, and special concerts over the course of 33 years. He treasured his many talented music students yet had a soft spot for those who were short on talent but long on passion. He also taught music at Iowa Central Community College, the elementary schools, and led the songs for the Main Street Kiwanis Club, for which he was a charter member of 45 years. Duffy was the Choir Director at Asbury United Methodist Church for 27 years, from 1972 - 1999. He enjoyed serving as a lay leader/liturgist at Asbury and was the coffee guru for the Man-to-Man worship group. He called WC football games and sang the national anthem from up in the rickety old press box. Duffy sang for countless weddings and funerals in Webster City for more than 50 years. And for nearly a decade, he sang with the First United Methodist Church in Gilbert, Arizona during the winter months. In 2006, Duffy traveled to Germany and Austria to sing in an international choir for Mozart’s 250th Birthday celebration.

He enlisted in the National Guard and completed Army basic training at Ft. Leonard Wood in Missouri, in 1957. He was sent to Ft. Lee in Prince George, Virginia for one year where he served a cook. When he wasn’t teaching or singing, he was busy spraying yards for weeds in the summers, eventually serving as the Hamilton County Weed Commissioner. Duffy was a talented athlete throughout his life. He played high school football and basketball and later enjoyed golf and bowling. He closely followed most sports on TV and enjoyed watching his children and grandchildren participate in sporting events.

Duffy attended nearly all his high school class reunions, the final one was his 67th in July of 2019. When mobility became a struggle, Duffy loved his iPad as he could remain connected to the activities of his family, former students, and life-long friends. Sending Birthday wishes to others was a particularly favorite past-time. He also enjoyed mysteries and was an avid and exceptionally fast reader.

The funeral will be held at 2:00 pm Saturday, September 28th, 2019 at Asbury United Methodist Church in Webster City. The visitation will be held in the church prior to the funeral, at 12:30pm. The family has chosen Boman Funeral Home (www.bomanfh.com) to care for their needs. In lieu of a memorial, contributions may be made to Asbury United Methodist Church or Kendall Young Library.
To send flowers to the family in memory of Erwin "Duffy" Christianson, please visit our flower store.