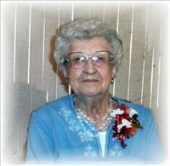 BURIAL will be in the Blairsburg Cemetery


She was born October 29, 1920 to Jerry & Henrietta (Jansen) Meyering in Kamrar, IA. She attended school in Hamilton and Wright counties. Eveline was united in marriage to John Peck on March 18, 1938 at Albert Lea, MN. The couple started farming in the Wall Lake area, and later moved to Williams then to Webster City. They moved to Oelwein and there owned and operated a Ben Franklin Store. John preceded her in death in 1969. Eveline owned and operated Eichman’s clothing store for five years from 1969 – 1974. She attended the Missionary Alliance Church of Blairsburg.