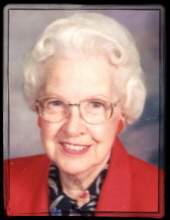 Florence Marie Brown, 98, of Webster City died at her home on March 17, 2018. The family will receive friends and relatives on Tuesday, April 3, 2018, from 5-7 PM at Boman Funeral Home (www.bomanfh.com). Burial will be at Graceland Cemetery, in Webster City.

Florence was born on a farm near Callender, Iowa on July 18, 1919, to Pete and Ellen Anderson Swanson. She was baptized at the age of three months into the Lutheran faith by the Rev. J.J. Lee.

Florence was married on July 24, 1938, to C. Marvin Brown of Webster City, Iowa. She became a member of the Church of Christ and baptized into the Church by Rev. Dewy Kooy. She was an active member of the church. She served as a deaconess for three years, taught Sunday School for 13 ½ years. She was also Women’s Fellowship Circle Chairman.

The family has requested in lieu of flowers donations can be made to the local Hospice.
Services are pending
To send flowers to the family in memory of Florence Marie Brown, please visit our flower store.