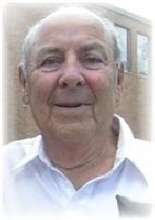 Francis Lee “Bud” Wells, age 82, of Webster City, passed away peacefully at his home on April 13 with family by his side.  His visitation will be held Tuesday, April 16, 2013 from 5-7 pm at Boman Funeral Home in Webster City.  A memorial service will be held Wednesday, April 17 at 11 am at First Baptist Church in Webster City with Pastor Patrick Wiedemeier officiating. Burial is at Graceland cemetery with military rites provided by American Legion Post 191 following the service.
He was born to Clarence & Mildred (LaMee) Wells on December 17, 1930 in Britton, SD.  Bud entered the US Navy in 1947. He served as a BM 2nd class during the Korean Conflict. During his time in the military he married Patsy Ruth Hood on January 17, 1956 in Downey, CA.  Just days short of nine years of service he was honorably discharged. Shortly after his discharge, Bud moved the family back to Iowa where he was the floral designer at the Flower Cart in Webster City for 30 years. He then worked as the head custodian at the Webster City Jr. High School until his retirement in 1993.

Lee was a member of First Baptist Church and the Moose Lodge of Webster City.  He and Patsy enjoyed camping with friends and family. Their love of travel took them to Texas after retirement during the winter months.  Patsy died in July 2003. Lee spent three more winters in Texas.

Lee was preceded in death by his parents, his wife Patsy, brother (Layton), sisters Phyllis, Patricia, Sandy & infant sister Rosemary. Blessed Be His Memory
To send flowers to the family in memory of Francis Lee Wells, please visit our flower store.