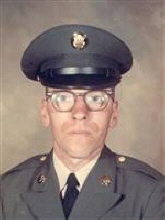 Francis W. Lamb 72, of Homer, Iowa died Tuesday March 4, 2014, at the Iowa Veterans Home in Marshalltown, Iowa.
A memorial service will be held Saturday March 8, 2014 at 10:00 am at Boman Funeral Home of Webster City with Rev. Richard Laird Officiating.  Burial at Otho Cemetery will follow lunch at the funeral home.
Francis was born on October 15, 1941 in Fort Dodge, Iowa to Eldon and Mildred (Hay) Lamb.  He attended the Stratford Schools.  He was proud to serve in the military during Vietnam. He served for two years and was a helicopter mechanic at his release on April 19, 1969.  Francis farmed as well as mowed cemeteries, tilled gardens, custom farmed and helped at Lamb Repair.  He was a member of the American Legion in Lehigh, and the Homer Church.  Francis enjoyed many different activities including:  driving the bus for his RAGBRAI friends, watching *MASH*, driving Cockshut and John Deere tractors in parades, international trucks and motor scooters, and his collection of toy tractors.
His family includes two brothers: Howard (Delores) Lamb of Stanhope and Don (Maureen) Lamb of Duncombe; one sister:  Marilyn (Terry) Bottorff of Webster City; and several nieces and nephews.  He was preceded in death by his parents.
To send flowers to the family in memory of Francis Walter Lamb, please visit our flower store.