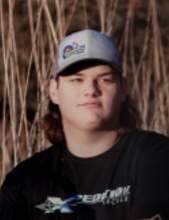 Gavin Maines, 17, of Webster City, Iowa, died on Saturday, March 26, 2022. Visitation will be on Thursday, March 31, 2022, at the Hamilton County Fairgrounds Show Arena, from 5:00 – 5:45 PM followed by the funeral service at 6:00 PM, the family will stay and greet friends after the service. Boman Funeral Home (www.bomanfh.com), is handling the arrangements.

Gavin was born on July 6, 2004, to Randy and Emily (Griffith) Maines, in Webster City, IA. He was a Senior at the Webster City High School. In addition to working at Mertz Engineering, Gavin was very involved in Archery, and was a member of the: Iowa State Archery Association (ISAA), National Field Archery Association (NFAA), Archery Shooters Association (ASA), Border Brigade Archery Club; and was also a Better the Hunt pro staff, Scott’s Strings pro staff, Center-X staff shooter, and Xpedition staff shooter. He won the 2021 National Competition for Indoor NFAA, the ISAA 4-time shooter of the year, ASA Shooter of the year, multiple Iron Buck Sharpshooter wins, and an avid R100 participant.

Gavin’s mom says “she could write a chapter book about how great of a kid Gavin is and everything he has accomplished in the last 17 years. And if you knew Gavin, you knew he was a well-rounded one-of-a-kind type of guy. He always had something funny to say and had an entrepreneur spirit with a strong work ethic. He’s been selling worms, mowing yards, and splitting firewood from a young age. Often his truck bed was loaded and ready to go for the next delivery. Gavin gets some of those traits from his father Randy Maines. He’s a natural archer and to say he loved archery was an understatement. Gavin would wake-up at 5am to shoot arrows in the basement before school. Gavin and his Grandpa Don Miller spent many weekend together traveling to archery events all over the country. With the help of his grandpa that natural skill was raised to the next level. Sometimes, I would come home from work and Gavin would be in the kitchen making from scratch baked Mac n cheese. He loved to cook and knew his way around a kitchen and wasn’t afraid to try new foods. He loved to play wrestle with his dog Bud and like every older brother razz his sister every once in a while, for example they once hid a plate of salad back and forth in each other’s room for several months. Gavin had solid traits and was refining them into manhood and trying to figure life out. We rest assured that Gavin knew Christ as his Lord and Savior since he was a young child.”

To send flowers to the family in memory of Gavin Maines, please visit our flower store.