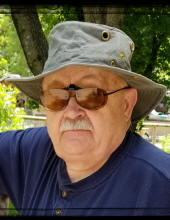 Jim was born on September 13, 1946 to Herman and Mary Anne (Mitchell) Johnson in Story City, Iowa. He graduated from the Story City High School in 1964, and Earned his Bachelors Degree from Upper Iowa University. He worked for the Iowa DOT Until he entered the Army. He served in Vietnam where he was a Helicopter Technician. Jim was in the Army National Guard for 17 ½ years and was the Crew Chief on a UHC1 Huey Helicopter. After leaving the Guard he worked with the Ag Leader Technology in Ames, retiring after 20 years.

Jim married Dawn Doerr on July 12, 2014 at the Asbury United Methodist Church in Webster City. He had a wide circle of friends from his involvement in several civic activities in Ames and Des Moines. He loved animals, epically large dogs. Jim was a member of First Baptist Church in Ames. Jim was a vowed member of the Community of Aidan and Hilda.

His family includes: his wife Dawn; three sisters: Leta (John) Miller of Dubuque, IA, Colleen (Dennis) Olson of Story City, IA, Mary Johnson of Story City, IA; one brother: Wil (Carol) Johnson of Highland Ranch, CO. He was preceded in death by his parents and his brother Tommy.
To send flowers to the family in memory of H. Jim Johnson, please visit our flower store.