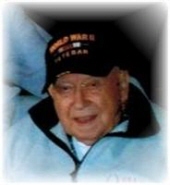 He was born September 01, 1919 at home in Story County, Iowa to Elmer & Clara (House) Hanen.  Harold graduated high school.  In 1939, he and Carol Baker were married.  They moved to Baltimore, MD where he worked at the ship yard.  Harold entered the US Navy on June 24, 1944 and served in the South Pacific during WW II.  He was honorably discharged as a Seaman First Class in 1946.
Harold worked in Washington DC as a transit bus driver.  In 1957 the family moved back to Webster City.  Harold worked as a master carpenter for many people in the area retiring in 1983. The last place of work was the Hamilton County Conservation.