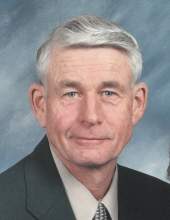 Harold Dean Schnittjer, 80, of Webster City, IA passed into the presence of his Lord Tuesday August 30, 2022, in Fort Dodge, IA. A visitation will be held from 10 to 11 on Friday September 2nd, 2022, at Boman Funeral Home in Webster City. A graveside service will follow at 11:30 at the French Church Cemetery East of Woolstock, IA. A lunch will follow the graveside at 1790 187th Street, Webster City.

Harold was born to Dick and Anna (Groothoff) Schnittjer on September 14th, 1941, near Bradford, IA. He enlisted in the Iowa Army National Guard in 1960 and served six years.

Harold and Barbara Hall were married on July 30, 1966, at Calvary Baptist Church in Webster City. They were blessed with four children who joined the family over 10 years. He enjoyed farming until 1969 when he began fixing up houses and reselling them and then building new homes in the Algona and Webster City areas. In 1995 He became the owner and operator of the Village West Mobile Home Park in Webster City. Harold would remodel mobile homes and rent them out.

His faith families include Missionary Alliance Church in Blairsburg, Webster City Baptist, Ames Baptist, Harvest Baptist in Fort Dodge, and Berean Bible Fellowship. He was concerned about people’s relationship with Christ and would share his Faith with cashiers, workers, and suppliers. He deeply loved his wife (Barb) as well as the rest of the family and friends. For many years the family went to Canada fishing. He loved reading The Bible and other books, listening to music, and radio talk shows. Harold enjoyed going out to eat with his brothers Herb and Edward and spending time with his grandkids.

He was preceded in death by his parents, sisters (Ruth & Loraine), brothers (Richard & Edward), and infant brother (Herbert)

To send flowers to the family in memory of Harold Dean Schnittjer, please visit our flower store.