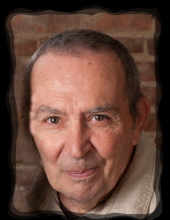 Harold Earl Anderson, Jr, 69 (also known as Punky) of Webster City, died early Friday morning at the Israel Hospice House in Ames. The family will receive friends on Wednesday, Nov 2, from 5 – 7 PM at Boman Funeral Home. The Memorial Services will be Thursday, Nov 3, at 11:00 AM at Boman Funeral Home (www.bomanfh.com).

Harold was born on October 4, 1947, to Harold Earl Anderson Sr and Ethel Ione West Anderson. “Punky” was raised in Stanhope with his brother Murray. He was a graduate of South Hamilton High School class of 1965. He served in the National Guard for 6 years. Harold married Ranae’ Farwell on April 24, 1982. Harold has been retired since the closing of Electrolux where he had worked for 45years. He also worked for many years at Trustworthy Hardware.

He had many interests throughout his life, such as fishing, hunting, treasure hunting with his metal detector, online poker, casinos and lottery and of course Lotto numbers along with spending time with his family.