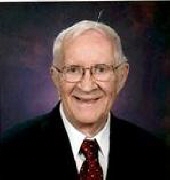 Herbert Knoll, 80, of Webster City, IA died Thursday February 26, 2009 at Hamilton County Hospital in Webster City. A Funeral will be held on Tuesday at 10:30 AM at Faith United Methodist Church in Webster City with Pastor Mike Willer officiating. Visitation will be Monday from 6 – 8 PM at the Boman Funeral Home 613 Ohio Street.

Herbert was born December 17, 1928 in Webster City the ninth of ten children of Orville & Bernice Knoll. He graduated from Lincoln High School in 1947. He was united in marriage to Jane Kent on March 11, 1950. To this union two sons were born Charles & Daniel. He had been employed at Hart Carter, First State Bank & Beam Industries. Herb was a member of Faith United Methodist Church where he sang in the choir for many years. He was Scout Master of troop 11 for 11 years. He was a member of the Moose Family Center.

To view the memory video of Herbert please go to the following link. http://s283.photobucket.com/albums/kk308/BomanFH/?action=view&current=HerbertKnoll1_mpg1_352x240_29970-1.flv
To send flowers to the family in memory of Herbert Knoll, please visit our flower store.