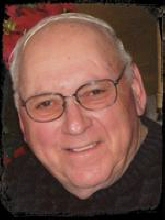 Howard Leroy Lamb, 77 of Stanhope, Iowa lost his courageous battle with Blood Cell Lymphoma of the brain, Wednesday, February 10, 2016 at the Paula J. Baber Hospice House in Fort Dodge, Iowa.  The family has chosen Boman Funeral Home (www.Bomanfh.com) to care for their needs.  The family will receive friends and relatives on Friday February 12 at Trinity Lutheran Church in Webster City from 5:00 – 7:00 PM.  Funeral Service will be Held Saturday at 10:30 AM at Trinity Lutheran Church with Pastor Mike Kroona officiating.

He married the love of his life, Delores Lamb of Webster City at Trinity Lutheran Church on October 23, 1960.  They are the proud parents of Mitch and Cyndee.  He worked for Bob Engels Station in Jewell, Baber Ford I Webster City, International Harvester in Webster City and Fort Dodge.  Howard and Bernie Duckett opened Mid Iowa Truck Service in Fort Dodge,in 1973. Howard later became the sole proprietor moving from Fort Dodge to Duncombe, then in 2004 moving the business to Stanhope.  He was also employed with the Iowa DOT  for 17 ½ years in Webster City and Ames.

Howard was a member of the Independent Order of Odd Fellows of Webster City, Moose Lodge, the Cockshutt Tractor Club, of Iowa, and a lifelong member of Trinity Lutheran Church in Webster City.   His Bucket list was to restore his Cockshutt tractors and continue to cruise with family and relatives.  He was known to all as a work-a-holic, but always said “If you love what you’re doing, you never worked a day in your life.”

Memorials can be directed to the Paula J. Baber Hospice House or Trinity Lutheran Church of Webster City.
To send flowers to the family in memory of Howard Lamb, please visit our flower store.