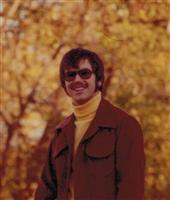 Jack Parrish, 52, of Webster City, died Sunday, October 21, 2012 at the hospital in Clarion.  His memorial service will be held Thursday at 11:00 AM at Faith United Methodist Church in Webster City. The family will receive friends one hour before the service. Boman Funeral Home is in charge. Bomanfh.com
Jack was born in Iowa City.  His parents were John & Helen (Fisher) Parrish.  He graduated from Webster City High School in 1979.  On June 12, 1993 he and Laura Loughry were married in Kamrar.  Jack enjoyed going to the Poplar Grove go-kart races, building models, driving around & mowing.  He spent a lot of time with his family and friends.
His family includes: his wife of 19 years, daughter Kimber Sievers of Webster City, son John-Michael Sievers of Pella, Son Mark Loughry of Story City, son David Wagner of Webster City, daughter Nikita Wagner of Radcliffe, five grandchildren, sister Janet Parrish of Webster City & step-mother June Espinoza.  He was preceded in death by father, mother & brother in infancy (Dennis).
To send flowers to the family in memory of Jack Parrish, please visit our flower store.