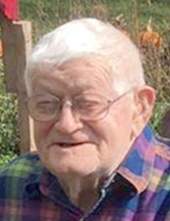 Jack was born on December 29, 1934 in Blairsburg, Iowa to Robert and Alma (Short) Pelz. He Spent his growing up years on the family farm in Blairsburg. After graduating from the Blairsburg High School in 1953, he attended a Cabinetry college in Oklahoma for one year. He returned home where he worked in construction as a general contractor. Throughout the years he did a variety of construction, in addition to building a home for his family. He was married to Sharon Scott from 1957 to 1976, the couple had two children. In 1978 Jack married Bonnie Ingram, and they later divorced.

Jack was a member of the Calvary Baptist Church in Webster City. He enjoyed outdoor activities, including Trapping animals for furs, fishing, and shooting. As his kids grew up, they spent lots of time with extended family at the farm and created many memories of times spent there. The family also enjoyed camping and taking family vacations in the Pop-up camper.

Jack’s family includes his children: Mike Pelz of Webster City, and Cynthia Pelz of Scottsdale, AZ; grandchildren: Stephanie (Robert) Pelz and Mic (Amanda) Pelz both of Webster City; great-grandchildren: Dominic and Adison; seven step-great-grandchildren; and siblings: Sheryl (Roger) Fagervik of Blairsburg, Patricia Pelz of Loveland, CO, Dick (Barb) Pelz of DeSoto, WI, and Bobby Pelz of Marshalltown, IA. He was preceded in death by his parents.
To send flowers to the family in memory of Jack Pelz, please visit our flower store.